92% of study participants achieved a reduction in PTSD symptoms using the Resona Health PEMF device (Pulsar XO) in a 30-day at home clinical trial. On average the therapy was ran 3-4 times per week over a 30-day test period. There were no drugs or chemicals used in this study.

Resona Health is conducting an ongoing research project using their PEMF devices for relief for several aliments. This was an at home 30-day study and the participants were instructed to run the PTSD protocol on average 3-4 times a week for 30 days. They were also instructed to consume a liter of water in the preceding 4 hours before therapy. It has been shown that the therapy works much better when the participant is properly hydrated, and it is believed that the frequencies resonate with the water in the body to transfer the energy to the cells.

The participant simply runs the protocol on the device and wears it around their neck with lanyard while watching TV, driving, siting at the computer, cooking, reading, etc. The device is about half the size of a cell phone and only weighs 2 ounces. The PTSD protocol is 2 hours and 15 minutes.

This is an ongoing study, and the purpose of this Phase 1 report is to show the results so far. Phase 1 consisted of 21 participants (n=21) both male and female over a wide age group. At the beginning of the study the participants completed the PTSD checklist PCL-5 which is widely used by the Veterans Administration (VA) for testing the effectiveness of various interventions. The PCL-5 is a 20-question survey with each question having an answer from 0-4. The higher the score, the more likely that person is suffering from PTSD. With 20 questions and the highest answer being a 4, the highest possible score is 80.

The VA has determined if someone scores 31-33 or higher, it is likely they are suffering from PTSD. The VA has also concluded that any score reduction, because of an intervention or therapy, greater than 11 points is considered both clinically and statically significant.

The participants then completed the same form after 30 days and the results were recorded.

92% of the participants saw a reduction in score after 30 days. 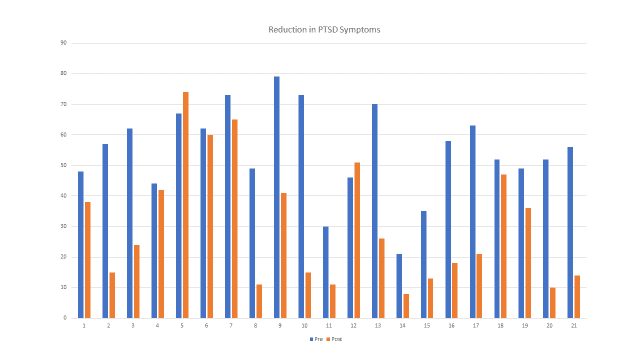 66% of participants saw a reduction in score over 11 points which is statically and clinically significant. The chart below shows the difference between the pre and post scores. The height of the bar represents the amount of improvement in the PLCL-5 score. 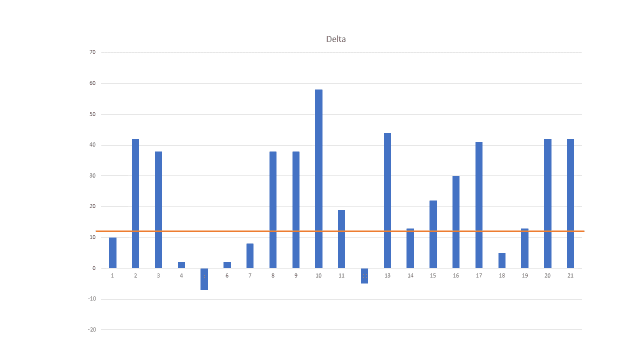 The P value was 0.000007 and anything less than 0.05 is consider statically significant. In other words, it means there is a 99.99999% chance that the improvement in scores was NOT due to chance alone.  Shown below are the results of the t-Test to determine the statistical significance. 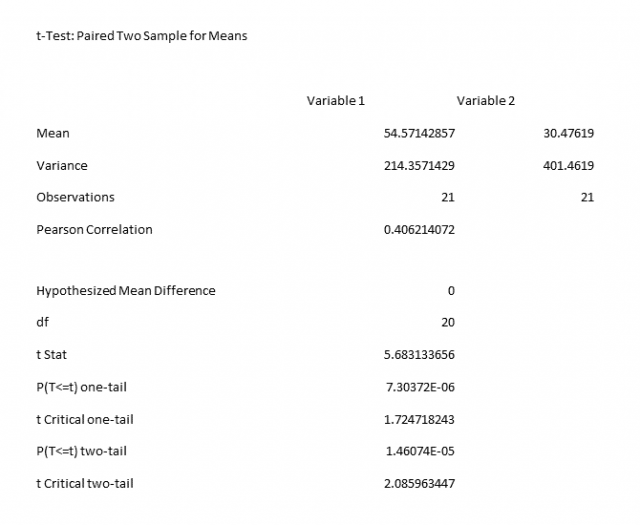 Participants were asked to report any adverse or side effects. None were reported and the treatment was well tolerated by all participants.  Most reported not feeling anything during the therapy session except that the device would get warm.

90% of participants saw a reduction in PTSD symptoms with 66% being clinically and statically significant. The study will continue but results so far are extremely encouraging. The Resona Health PEMF devices provide a safe and effective drug free solution to reduce PTSD symptoms.

The study will continue in to Phase 2 and anyone who suffers from PTSD is welcome to participate in the study free of charge and they get to keep the PEMF device.